“This is a directing career worth keeping an eye on.” 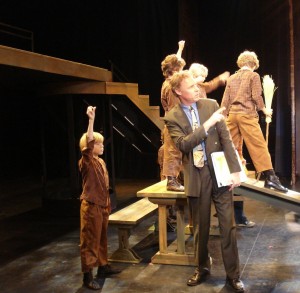 Luke Yankee has directed on and off Broadway and at regional theatres throughout out the United States and abroad. He has assistant directed six Broadway shows for such directors as Harold Prince, Brian Murray and Ellis Rabb. Regionally, he served as Producing Artistic Director of the Long Beach Civic Light Opera (one of the the largest musical theatres in America) and as Artistic Director of the Struthers Library Theatre, a landmark in Northwestern Pennsylvania. Producing and directing industrials and special events has taken Luke from Radio City Music Hall (with Dick Clark and The Rockettes) to the ms Crystal Symphony. His work has ranged from Coward to Mamet and Beckett to Sondheim. Luke has worked with many of the biggest names in show business, including Betty White, Alec Baldwin, Cynthia Nixon, Marcia Cross, Sir Rex Harrison, Peter Falk, Barbara Eden, Barry Manilow, Annette Bening, Barbara Cook, Quincy Jones and many more.
Member – SDC.