Luke Yankee’s plays include MARILYN, MOM & ME, THE LAST LIFEBOAT, CONFESSIONS OF A STAR MAKER, THE MAN WHO KILLED THE CURE, THE JESUS HICKEY, DIVA DISH!, A PLACE AT FOREST LAWN and DIVA DISH: THE SECOND HELPING.

“Like two strangers linked by fate on a Greyhound bus, the unlikely personal and professional friendship that developed between vulnerable, lost and emotionally needy Marilyn Monroe and crusty, maternal, no-nonsense Eileen Heckart on the western rodeo set of Bus Stop has now been preserved in amber by Luke Yankee as a stirring footnote to movie history you won’t want to miss.  It’s a funny, dark, heartbreaking and unforgettable new play that wraps you in cashmere.   Marilyn, Mom & Me is devastating!”

In 1956, when Marilyn Monroe was cast as the lead in the film Bus Stop, she was the biggest star in the world. She had taken the previous year off to study with Lee Strasberg and had become the poster child for “method” acting.  The tough, no-nonsense, Broadway character actress Eileen Heckart was cast as her best friend in the movie.  As a part of her newly discovered style of acting, Marilyn was determined to make Heckart her best friend – both on-screen and off. Reluctantly, Heckart went along with it for the sake of the film and found herself emotionally entrenched in the life of Marilyn Monroe.  For all outward appearances, Marilyn had it all. And yet, more than anything, she yearned to have what Heckart took for granted:  a stable marriage, two kids and a respected Broadway career.

Forty-five years later, Heckart’s middle-aged gay son, Luke, is trying to unravel his mother’s relationship with Monroe in order to better understand his own path with this highly critical, caustic, yet loving woman. Why did his mother burst into tears every time someone mentioned Marilyn’s name? Clearly, she’d had a deep impact on Heckart. If Luke could get his Mom to open up about Monroe, maybe it would make her a more sympathetic mother – or at least help him to connect with her on another level.

This deeply personal comic drama explores a side of Marilyn Monroe no one has ever seen before by focusing on her craft as an actress as well as her friendship with another woman. It also shows a caring, yet highly complex mother/son relationship explored through the lens of one of the greatest film stars the world has ever known.  The play utilizes the chaotic world of movie-making in 1950’s Hollywood to uncover universal truths about love, acceptance, and what it really means to feel loved and wanted.

“Luke Yankee has written a surging drama that is riveting, dramatic, educational and entertaining all at the same time.   THE LAST LIFEBOAT is destined to become a theatre classic!”

THE LAST LIFEBOAT has received more than 55 productions across the United States and Canada.  Published by Dramatists Play Service, it is the untold story of the owner of the White Star Line when the Titanic sank, whose decision to save himself rather than go down with the ship made him the scapegoat for one of the greatest disasters of all time.  This epic story told on a bare stage with an ensemble cast playing multiple roles explores not only the events leading up to the shipwreck itself but the aftermath and sensationalized trials of an event that changed the work forever.

In the style of THE LARAMIE PROJECT or the PETER AND THE STAR CATCHER, the play can be presented with a cast ranging from 7 to 40 actors with an ensemble cast playing multiple roles on a bare stage.

“Imagine the epic story behind the drama of the sinking of the Titanic, revealed with easy, minimal staging on a bare stage!  Luke Yankee has written a surging drama that is riveting, dramatic, educational and entertaining all at the same time.  THE LAST LIFEBOAT is destined to become a theatre classic!”

➡ PURCHASE A COPY OF THE SCRIPT FROM DRAMATISTS PLAY SERVICE

➡  READ REVIEWS OF “THE LAST LIFEBOAT”

CONFESSIONS OF A STAR MAKER

Hollywood, 1955.  The glamour capitol of the world.  Lunch at The Brown Derby, cocktails at The Trocadero, dinner at Ciro’s.  Hedda, Marlon, Natalie and Rock rule the world.  One of the players in this arena is Nick Ralston, a hustler in every sense of the word. Nick, a closeted gay man, is an up and coming agent who will stop at nothing to promote his clients and maintain the appearance of an extravagant lifestyle – whether that means charm, extortion, sexual favors, blackmail or selling out to the highest bidder.

Into this world walks Jamie and George, two handsome, young men in search of an agent.  Even though this is a world where sexuality is highly repressed (at least on the surface), these two guys flaunt their many attributes in front of Nick, who invites them to a pool party with some other members of his “stable of regulars”.  The boys are so hungry for success in Tinsel Town, they’ll do whatever it takes.

Nick is in hot pursuit of a new client, Stephanie Fletcher, a former child star now trying to be taken seriously as an adult actress. Stephanie and her overprotective mother aren’t interested in a second-rate agent like Nick, until he promises Stephanie a screen test for the hottest director in town, who is doing a rebellious teen movie called Hell on Wheels. Of course, the only way Nick can actually get Stephanie seen for this role is by threatening to blackmail the director. Nick doesn’t like to lose.

Nick sees real star quality in Jamie. He wants to remodel him as the next beefcake matinee idol…but only if he dumps his boyfriend, George. He is too concerned about the Hollywood image factory to settle for anything less.  Meanwhile, Stephanie’s egocentric stage mother will stop at nothing to keep her little girl from growing up.  She knows the squeaky-clean image is her meal ticket.  The public may turn on her as a “bad girl.” She employs every kind of psychological abuse a parent can use on a child…until it nearly kills Stephanie.

Add into this cocktail shaker of depravity and comprises Nick’s “old world” Greek mother who wants nothing but for her son to settle down and get married, producers and publicists who are trying to keep their clients’ dirty little secrets out of the papers and a world ripped from the tabloids and you have the glitz and glamour of the golden age of Hollywood that is Confessions of a Star Maker.

Scene from a college production of CONFESSIONS OF A STAR MAKER

THE MAN WHO KILLED THE CURE

The Man Who Killed The Cure is inspired by the life and death of Dr. Max Gerson, one of the pioneers in the world of natural healing.  When Max Gerson and his business partner, Rudolph Heller, escaped Nazi Germany, they had no idea what awaited them in New York. Rudy wanted the good life, treating his patients the traditional way. But when Max created an all natural cure for cancer, the medical world felt threatened…not to mention his friend and colleague. The AMA and the big pharmaceutical companies would stop at nothing to keep this natural cure off the market, but Max was equally determined that the world should know about it. Inspired by true events, this gripping and controversial story delves into a world of medicine where the end goal is not healing, but profits. This play recently received its first workshop production at the University of California – Irvine in February 2017. It was nominated for the Otis Guernsey New Voices in the American Theatre Award and was a semifinalist for the Eugene O’Neill National Playwrights Conference.

➡  READ A SYNOPSIS OF “THE MAN WHO KILLED THE CURE”

➡ PURCHASE A COPY OF THE SCRIPT ON AMAZON 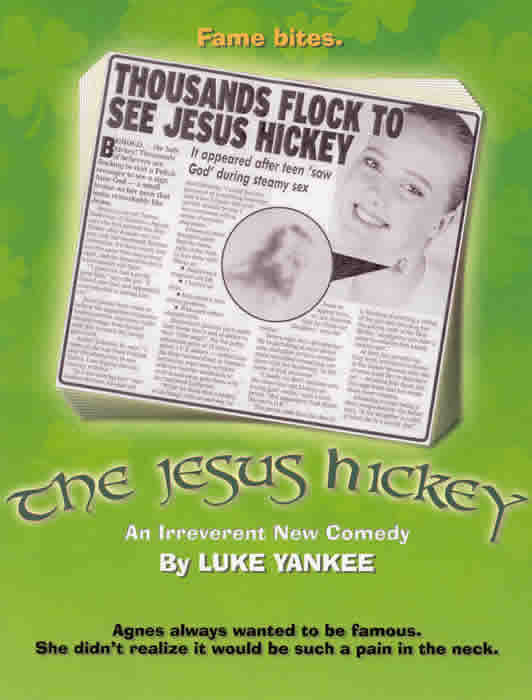 THE JESUS HICKEY is a modern day fable about the seduction of celebrity funneled through the window of religious fanaticism. Funny, bawdy, outrageous, and touching, it tells the story of an impoverished family whose lives are irrevocably changed when their only daughter goes “down to the embankment” with a young man. Though she’s been warned repeatedly by her father and grandmother about what happens to girls who do, no one could have foretold what could happen when the love bite on her neck appears in the image of Christ.

The world premiere production opened at the Skylight Theatre in Los Angeles, starring Harry Hamlin, star of TV’s LA LAW and such films as MAKING LOVE and CLASH OF THE TITANS.

THE JESUS HICKEY is the winner of the TRU Voices Award as well as the first annual Joel and Phyllis Ehrlich Award. given for “a commercially viable, socially relevant new work of theater.”  It received staged readings at the Phoenix Theatre, The Long Beach Playhouse in New York at the Players Theatre starring Tony Award nominees Matthew Arkin and Merle Louise.

➡  PURCHASE THE SCRIPT ON AMAZON

➡ READ WHAT CRITICS ARE SAYING ABOUT “THE JESUS HICKEY“

➡ READ A SYNOPSIS OF “THE JESUS HICKEY “

A PLACE AT FOREST LAWN 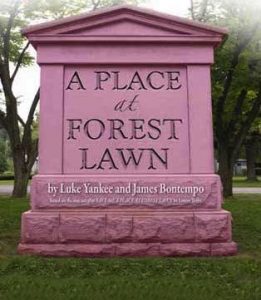 Luke has co-written (with James Bontempo) A PLACE AT FOREST LAWN, based on the award-winning one-act play by Lorees Yerby. Winner of the New Noises Festival Playwriting Award, it was also a finalist in the Palm Springs International Playwrights competition.  In addition, Luke has directed numerous staged readings of the play on both coasts with all-star casts.  The Off-Broadway cast included Tony Goldwyn, Frances Sternhagen, Marian Seldes and George Grizzard. The Los Angeles cast included Betty White, Marian Ross, John Glover, Marcia Cross and Steven Culp.  The world premiere production was at The Arvada Center for the Performing Arts, a 500-seat Equity theatre outside of Denver. It is published by Dramatists Play Service.

➡ Read the review of “FOREST LAWN” in WEEKLY VARIETY

➡ Read the review of “FOREST LAWN” in COLORADO BACKSTAGE

➡  READ A SYNOPSIS OF “A PLACE AT FOREST LAWN” 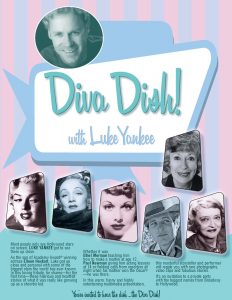 Most people only get to see Hollywood stars on screen. Luke Yankee got to see them up close. As the son of Academy Award-winning actress Eileen Heckart, Luke got up close and personal with some of the biggest stars the world has ever known. In this loving tribute, he shares these hilarious and heartfelt stories of what it was really like growing up as a showbiz kid.

Whether it was Ethel Merman teaching him how to make a martini at age ten, Marilyn Monroe babysitting his brothers or Paul Newman giving him acting lessons, he’s seen it all.

In this warm, funny and highly entertaining multimedia presentation, this masterful storyteller and performer will regale you with rare photographs, video clips and fabulous stories. It’s like party with the biggest names from Broadway to Hollywood…and you’re invited to hear the dish…the Diva Dish!

“Touching, hilarious and completely enthralling! Luke Yankee is such a wonderful storyteller you’ll want to hear the stories he tells again and again!” — Rex Reed 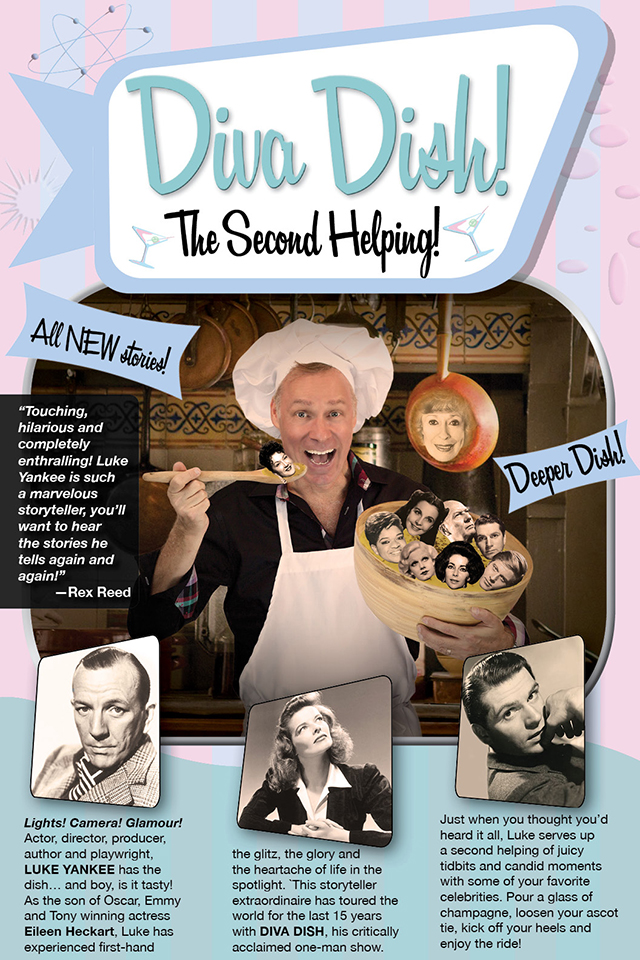 Lights! Camera! Glamour! Actor, director, producer, author and playwright, Luke Yankee has the dish….and boy, is it tasty! As the son of Oscar, Emmy and Tony winning actress Eileen Heckart, Luke has experienced first-hand the glitz, the glory and the heartache of life in the spotlight. This storyteller extraordinaire has toured the world for the last 15 years with DIVA DISH, his critically acclaimed one-man show. Just when you thought you’d heard it all, Luke serves up a second helping of juicy tidbits and candid moments with some of your favorite celebrities. Pour a glass of champagne, loosen your ascot, kick off your heels and enjoy the ride!